BISDN Linux supports the configuration of mirror ports. Mirrored ports replicate incoming/outgoing traffic, according to their configuration flag. The supported port mirroring flags are the following:

Please note that when mirroring ports with different maximum link speeds (e.g. a 10G port mirrored to a 1G port), the highest common link speed (1G for the aforementioned example) will be used for both ports.

The following example shows how to mirror ingress traffic from port 2 to port 8 in a switch, as shown in this figure: 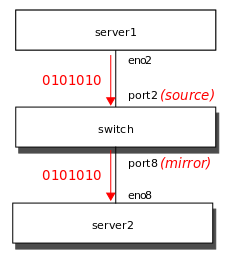 Add port 8 as a mirror port:

Where <IP> is the IP of the whitebox switch (localhost when logged in locally to the switch).

Then, set port 2 as the mirror source and configure the port type to only mirror ingress traffic:

See the mirror port configuration by running the following command on the whitebox switch:

Mirrored traffic cannot be captured on the switch mirror ports. Hence, to verify that traffic is being mirrored, we need to capture traffic on the server port that is connected to the mirror switch port. Within the example from the figure, the following command should be executed on server2:

The port mirror configuration can be deleted with the following commands:

Port mirroring works with physical ports, not logical ports, so to mirror the full traffic of a bonded interface all the individual bond members need to be mirrored. These can be either mirrored 1:1 to additional ports, or all bond members mirrored to one port.